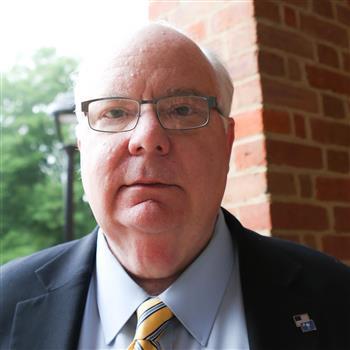 I was born in Washington D.C and came to Greenville when I became a student at Furman University. I graduated from Furman in 1976 with a B.A. in political science. I received my Master's from Furman in 1981 in Secondary Administration. I began my teaching career in 1976 so I've been a teacher for a long time. I have been at GTCHS since 2002.  My wife went to Clemson, so I married into a Tiger family. All three of my children are Clemson  graduates. My oldest son Jay is an account executive in Greenville. My daughter Sally is a teacher at Pickens High School.My youngest son Andy runs his own music production business. I enjoy playing golf and following Clemson sports.l

Greenville Technical Charter High School does not discriminate on the basis of race, color, religion, national origin, sex, gender, disability, age, marital status, immigrant status, veteran status, English-speaking status, pregnancy, childbirth, medical needs arising from pregnancy or childbirth, medical conditions related to pregnancy or childbirth, including, but not limited to, lactation, or any disability in accordance with applicable federal laws. The school, therefore, commits itself to nondiscrimination in all its education and employment activities. The following person has been designated to handle the nondiscrimination policies. For questions pertaining to Section 504 and Title IX, or to report sex discrimination, sexual harassment and/or assault, contact Jeff Taylor, Assistant Principal, at 506 S. Pleasantburg Drive, Bldg. 119, Greenville, SC 29607, 864-250-8844.
Copyright © 2002-2023 Blackboard, Inc. All rights reserved.